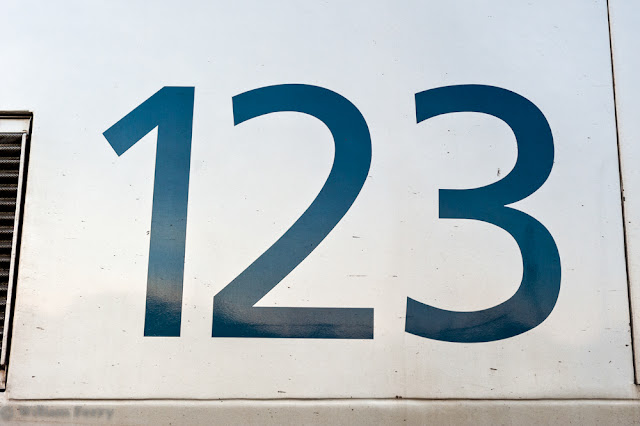 There are lots of hard ways but only one easy way to get from Chicago to Portland - take the train. 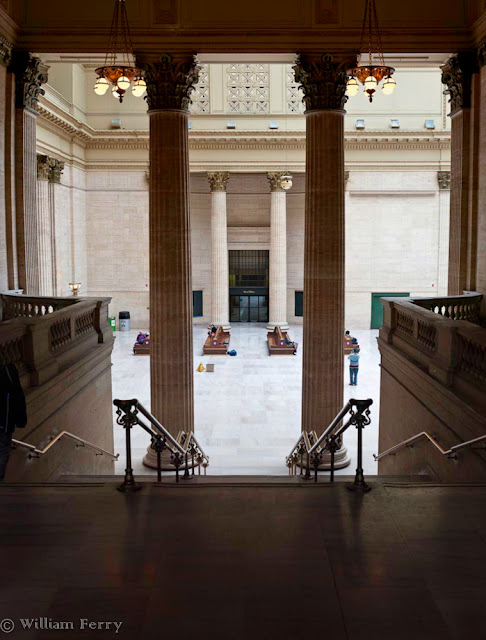 Chicago must be the rail capital of America. Not only do they have a dozen or so intercontinental trains leaving daily, they have five major train stations. This was once the main boarding area at Union Station (now everyone descends one or more levels) and the station handles all the Amtrak passenger trains and some commuter traffic (50,000 passengers a day. Also downtown is Ogilvie Transportation Center (40,000 commuters a day), Millennium Station (20,000 passengers daily), La Salle St. Station (16,000 daily) and Van Buren Street Station (10,000 per day). Most of these stations have been operating in one form or another since the 1850s.

Here passengers are heading for our train, the Empire Builder. From Chicago the train passes through Wisconsin, Minnesota, North Dakota, Montana, Idaho then splits in eastern Washington. Most of the cars continue on to Seattle. A smaller train is formed to go to Portland, Oregon, our destination.

We briefly play peek-a-boo with downtown Chicago before heading north to Milwaukee, our first major stop. For a January, it sure doesn't look like winter. 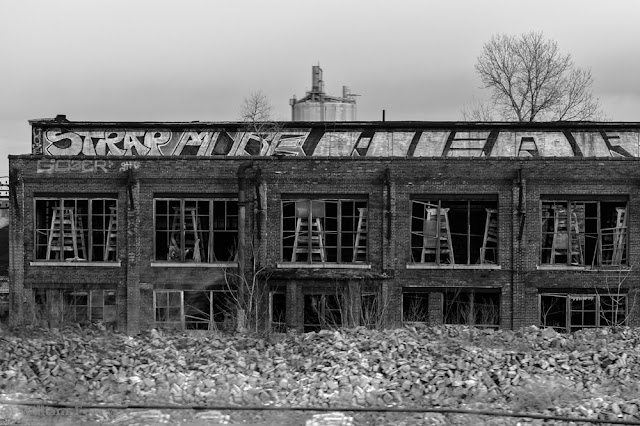 Though there are rural portions of northern Illinois and southern Wisconsin that are visible, what really strikes the eye are the abandoned warehouses and old, long dead factories. Graffiti "artists" have tagged anything.

Sometimes All It Takes Is One Shot 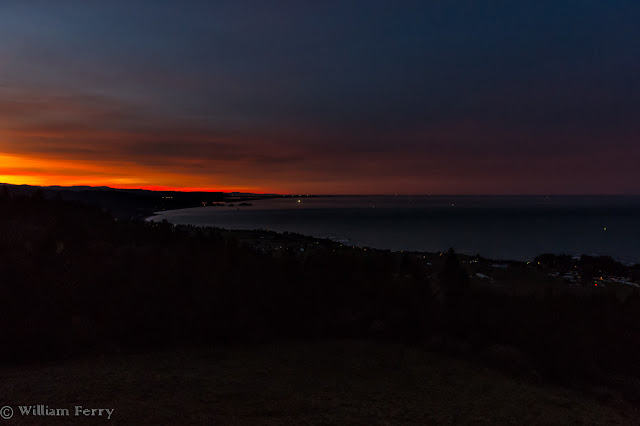 It's crab season on the California Coast and the lights of the crab fleet add to the enchantment of early morning.

Space Port? No, Sport of Kings! 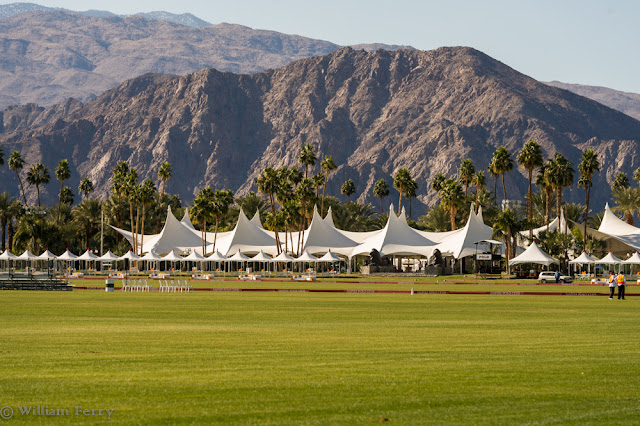 So this is what a top notch polo facility looks like today. I was told that it is the largest polo facility in the world. There are 13 grass polo fields - you are looking across two of them in the image above. There are tack rooms too numerous to count and 2 "exercise fields" and a 5 story tall "tent" for private events. This is also the site for the Coachella Valley Music Festival, which is a notable event in itself. Spread over 2 weekends, the Festival draws 40,000 folks. 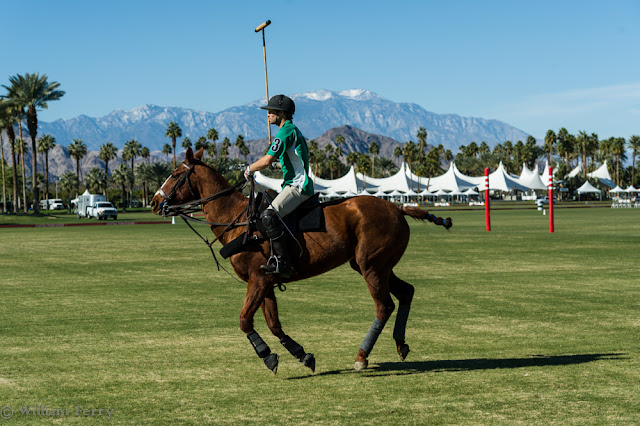 Rider and horse seem as one as this player is off and running. Individual fields are the equivalent of 3 football fields long and a 160 yards wide. The futuristic structure in the background (& in the image above) is where the big money sits. For $1,400 a season you can get your name on a plaque and the use of a "VIP Cabana" for 12 Sundays. 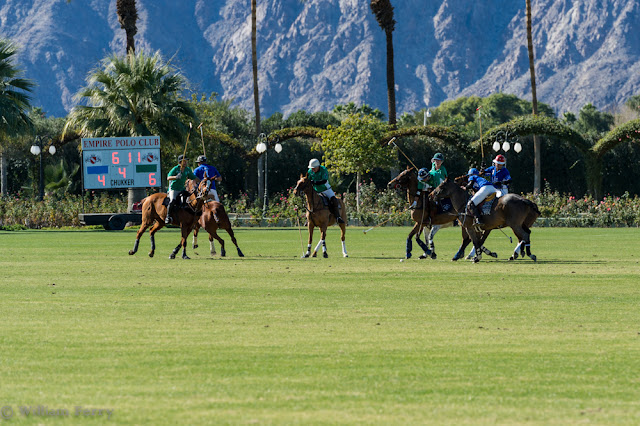 Teams are comprised of four riders and mounts. Total games can go two hours but they are broken down into 7 minute "Chukkas" or periods. At each Chukka break, horses are exchanged. It is not uncommon for players to bring 8 horses to a match. Didn't bring enough horses? You can rent one for $125 per Chukka. 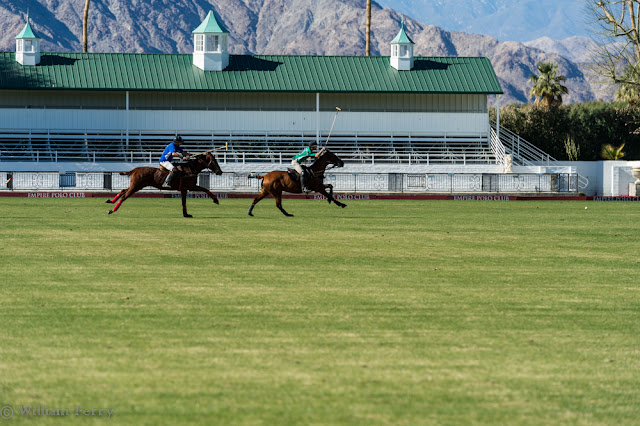 Polo is not a sport for lefties. For safety reasons, all polo is played right handed. 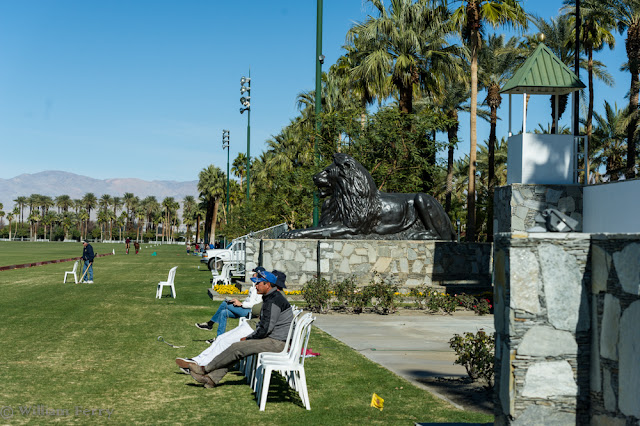 Polo is Persian in origin and can be traced back to almost the 5th century BC.
For many hundreds of years the lion, seen above, was the featured royal emblem of Iran. 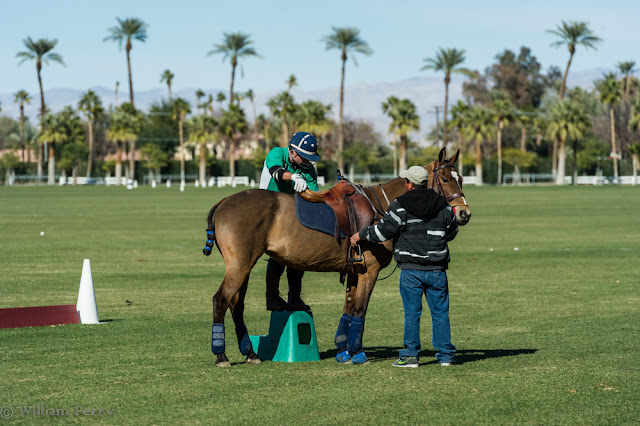 Riders use an English saddle (no pommel) and this guy provided a quick chuckle for me - he needed a little boost to climb onboard. 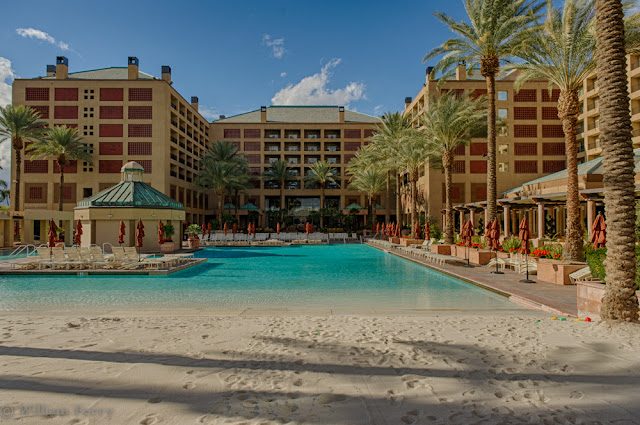 Things have changed in the Palm Springs area in so many ways over the years. There used to be no high rise resorts, now there are several. Marriott's Esmeralda Resort looks like it would be right at home in Hawaii. 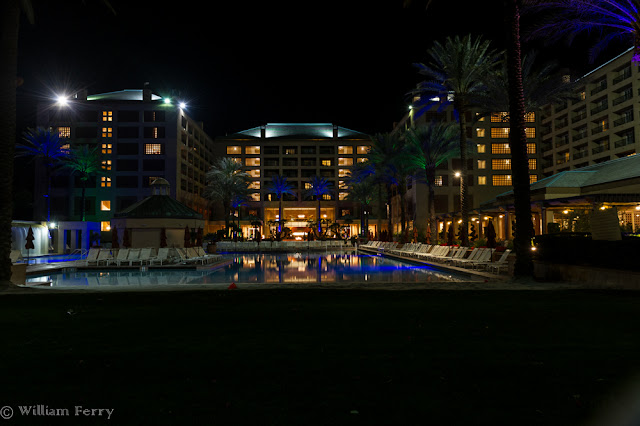 Same place but different in the evening. If the resort looks empty, it's because it was. In the lull between the Christmas holidays and the first big sporting event, most properties experience less than 30% occupancy. As we were leaving it was obvious that things were already ramping up. Once called the Bob Hope Classic, golfers and spectators were now arriving for the Humana Challenge. 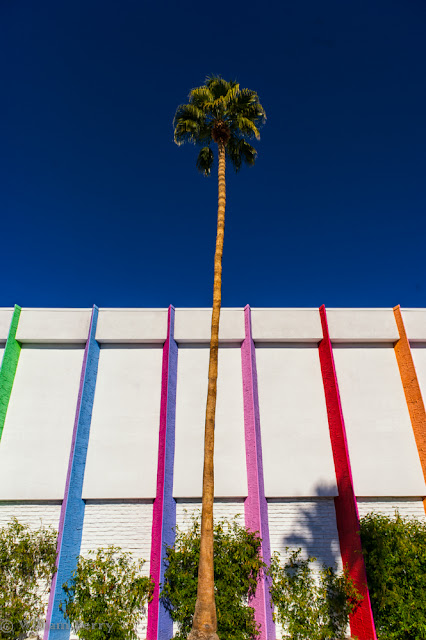 To stand out now, some older properties feel that they have to be really noticed. I love it how this palm tree still upstages the building. 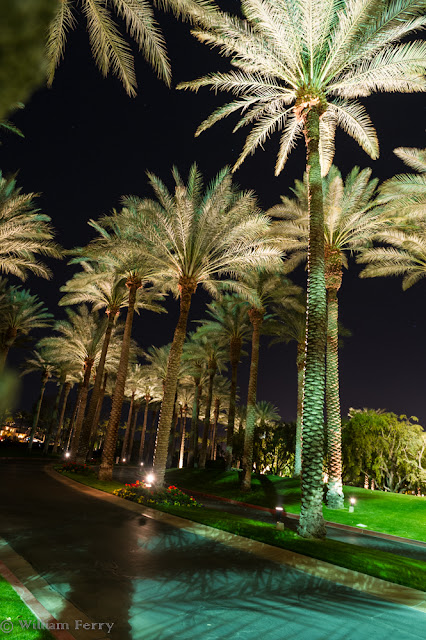 Add a little light at night and you've added even more magic to the desert.

This stylish structure is a clubhouse and restaurant for a 36 hole golf course.
Most everything of recent construction vintage was sleek and stylish, very little retro. 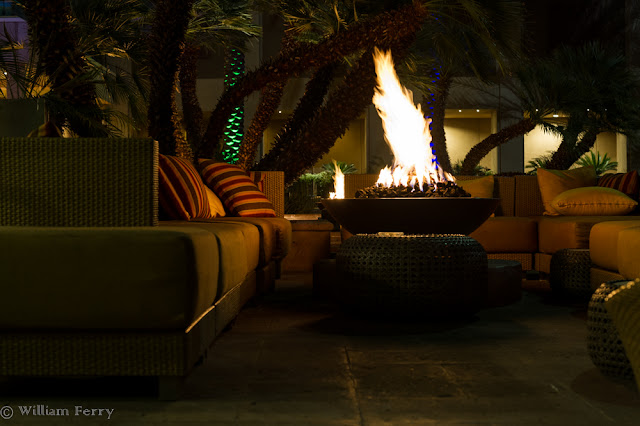 Though there were guests at our resort, cold nights kept many indoors. Usually temperate, even in January, we experienced cooler daytime highs than usual with the thermometer never getting higher than the mid 50s. As the sun fell on those extra cool nights, a highly mobile army of hotel groundskeepers rolled out to place shrouding on all the seasonal flowers. 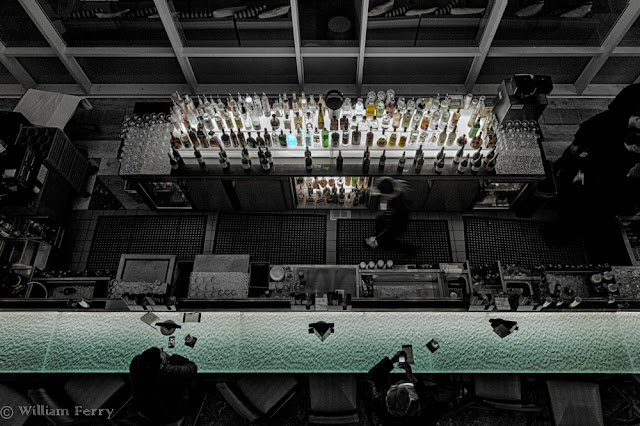 Even the bar crowd was sparse.


It's About The Outdoors 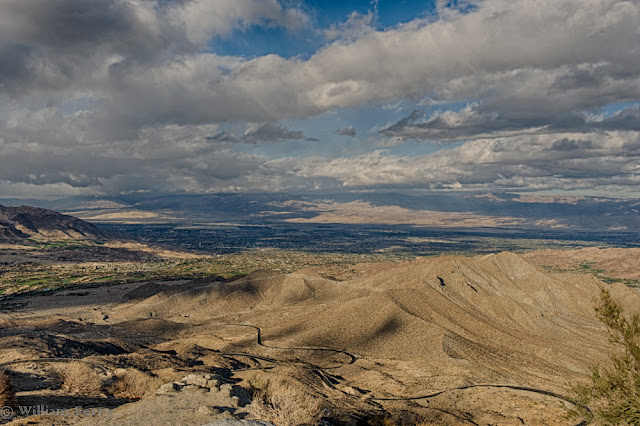 Looks like desert through and through, doesn't it. Look closer.

Up close there is an amazing green carpet that looks nothing like desert. Gated by Mount San Jacinto at left and San Gorgornio Mountain to the right, those mountains screen the rain. In just those few miles that separate those peaks, a transition occurs. From the Mediterranean climate of the greater LA basin to the beginning of a series of deserts that stretches all across the Southwest. 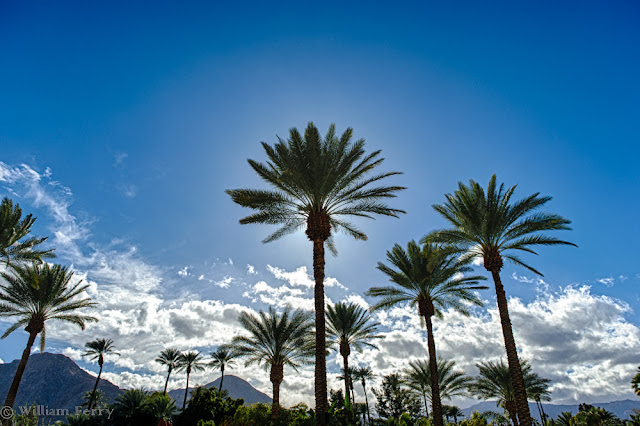 What the Coachella Valley (the area that encompasses Palm Springs and a dozen other desert communities) does have is access to Colorado River and a large aquifer 1,200' beneath the valley. Domestic water comes from the aquifer and the Colorado provides the irrigation for both garden and agriculture. 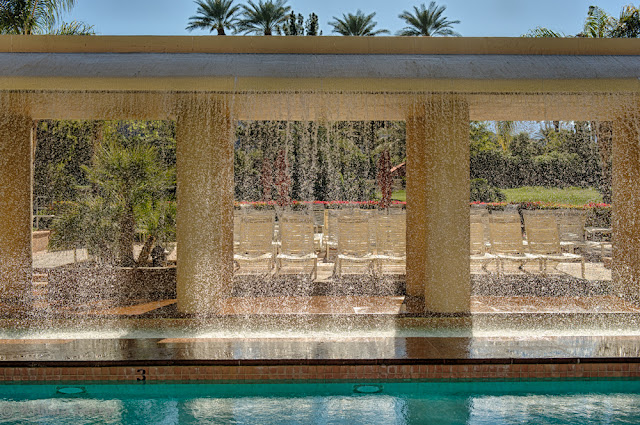 Incredibly, water in the desert is plentiful enough for ornamentation use. 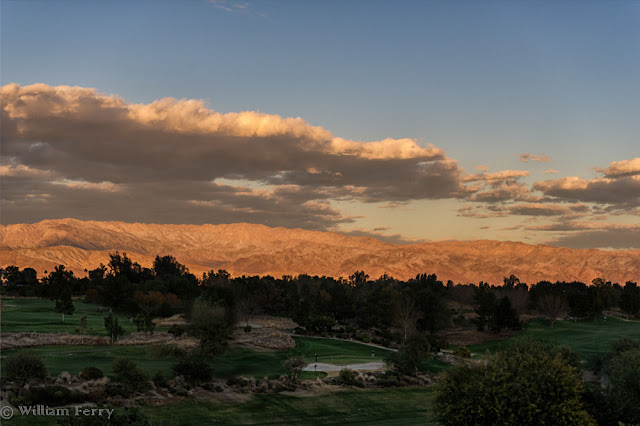 Ample water allows for the existence of over 200 golf courses in the Valley. Climb out of the valley into the Chocolate Mountains in the background and you can see that water doesn't reach there. 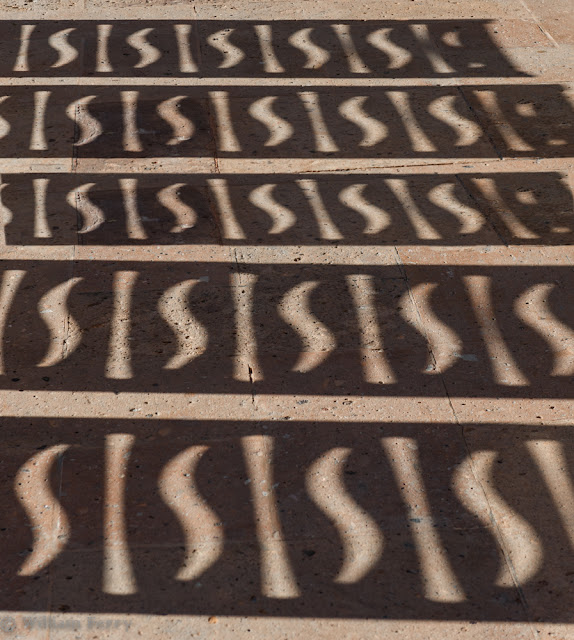 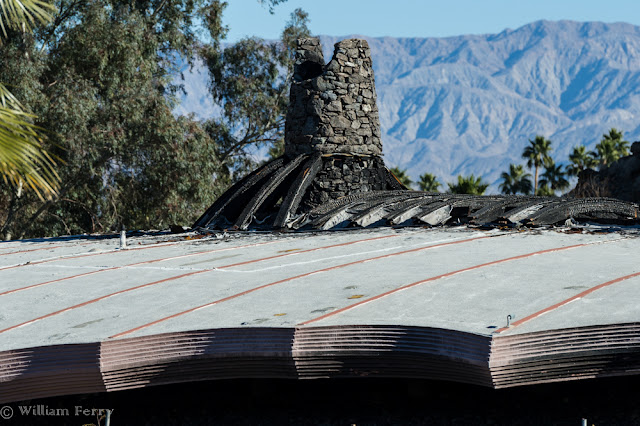 This is a bit of a side note but when I was a younger visitor, this was then one of the top of the line restaurants in the area - The Chart House. The owners moved on and took the name. A number of other operators attempted to run the restaurant but not with the same success. In 2012 the restaurant caught fire. Now it is in limbo and investigators are looking into an insurance fraud angle. One of my son-in-laws gave it an apt name - The Char House.